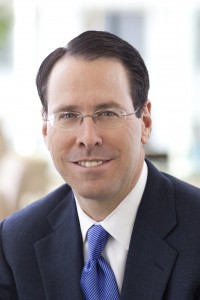 The American Conference on Diversity will honor AT&T Chairman and CEO Randall L. Stephenson with the Humanitarian of the Year Award on Thursday, April 6, during the 69th Annual Humanitarian Awards Gala at the Pleasantdale Château in West Orange, NJ.

Mr. Stephenson is a committed leader who boldly tackles diversity and inclusion issues inside and outside of the workplace. Last year, he addressed a well-stated position on “Black Lives Matter” and joined an AT&T employee-resource group conference as the keynote speaker to share his thoughts on diversity and inclusion.

“Do not tolerate each other. Work hard. Move into uncomfortable territory and understand each other,” he said. This video provides more insight into the current social-justice challenges that are plaguing our nation and the 2017 Humanitarian of the Year honoree’s advice: http://bit.ly/2kCvK11.

Since Mr. Stephenson’s appointment in 2007, AT&T has invested to become a global leader in the rapidly converging telecommunications, media, and technology space, providing integrated solutions that range from premium video entertainment, high-speed Internet and mobility to IP network services, security and the Internet of Things. Today, AT&T is the largest pay TV provider in the United States and one of the largest in the world. The company has more than $163 billion in 2016 revenues and 33 consecutive years of dividend growth.

The company has committed $400 million since 2008 to its signature philanthropic initiative, AT&T Aspire, which drives innovation in education to promote student success in school and the workplace. Mr. Stephenson also has led AT&T’s breakthrough “It Can Wait” campaign – an education and awareness program educating drivers that distracted driving is never OK. The program has amassed more than 14 million pledges of support.

Mr. Stephenson began his career with Southwestern Bell Telephone in 1982 in Oklahoma. He served as the company’s senior executive vice president and chief financial officer from 2001 to 2004, and from 2004 to 2007 he served as chief operating officer. He was appointed to AT&T’s board of directors in 2005. He is a member of the board of directors of Emerson Electric Co. and Boeing, a member of the PGA TOUR Policy Board, and National President of the Boy Scouts of America.