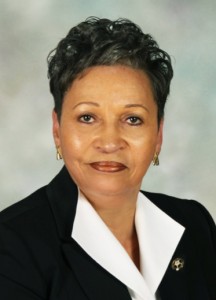 Sheriff Scott is the first female Sheriff for the county of Middlesex and the first African-American Sheriff in the state of New Jersey.

An exceptional leader and role model for all, Sheriff Scott was sworn in six years ago. In 1968, she started as one of the first females to graduate the county Police Academy to then be sworn in as Sheriff’s Officer. She then became Sergeant, Lieutenant, and Chief Warrant Officer until she was made Chief Sheriff Officer in 1991 – the first female to serve as the highest law enforcement officer in Middlesex County. During her long career at the Sheriff’s Department, she supervised all Sheriff’s Officers, oversaw all courthouse security, instituted fingerprinting programs in schools, established a senior citizen home-security program, and coordinated prisoner transport services with 25 municipalities within Middlesex County.

Sheriff Scott has made significant improvements to the management of the Sheriff’s Office, including undertaking the first accreditation process in the history of the Middlesex County Sheriff’s Office. This review is a rigorous analysis of the organization’s policies and procedures, which leads to the prestigious New Jersey Chiefs of Police Law Enforcement Accreditation. Only 10 other Sheriff’s Offices in New Jersey have achieved this prestigious designation. During her term, Sheriff Scott also made substantial changes to the personnel structure of the Sheriff’s Office and has implemented major improvements in technology.

Sheriff Scott, a Gold Life Member of the Policeman’s Benevolent Association, received the Perth Amboy Hall of Fame in 2008 and the NAACP Award for Outstanding Service. She is a member of the Board of Directors for the Jewish Renaissance Foundation and has served on the Executive Board of the Constitutional Officers Association of New Jersey. In 2013, Sheriff Scott was selected as the Middlesex County 200 Club Honoree. The Supreme Court appointed Sheriff Scott to the 2016-2018 Supreme Court Committee on Court Security.