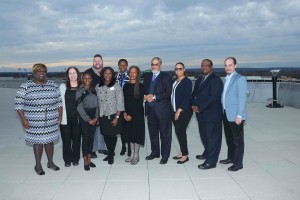 Did you know that 1,094 hate incidents were reported to the Southern Poverty Law Center (SPLC) one month after the US presidential election? That the majority of these incidents took place in K-12 classrooms? That immigrant, Black, Muslim, and LGBTQ people were the top targets? Hate is not restricted to individual acts – it spreads through words, fear, intimidation, and exclusion.

These are just a few of the findings shared during the American Conference on Diversity’s inaugural No Hate Town Hall held earlier this month at Kean University. From corporate diversity officers and community advocates to faith leaders, educators, and nonprofit directors, nearly 200 people filed into the school’s STEM building auditorium to learn from social justice leaders about how to fight the rising tide of hate unleashed on our communities since Nov. 8.

During the two-hour Town Hall, panelists addressed questions on the definition and history of hate and how it manifests today; the criteria used to label a hate group; the connection between economic struggles and racial hatred; how crimes against people with physical, developmental, and/or emotional disabilities fit into the conversation on hate; and what educators can do to combat hate and teach inclusion. 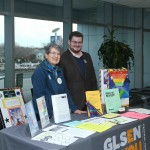 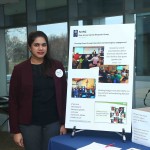 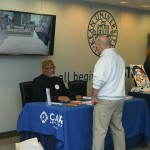 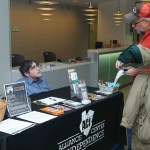 The Town Hall discussions were kicked off by the American Conference on Diversity President and CEO Elizabeth Williams-Riley (below, left) and Board of Trustees Co-Chair and New Jersey Natural Resources Customer/Community Relations Director Tom Hayes, who introduced the keynote speaker Lecia Brooks (below, right), Director of Outreach at SPLC. Sharing analysis from the organization’s self-reported hate-incident database, Ms. Brooks said: “What we found is that people became emboldened by Trump’s victory and felt they could act out their bias and bigotry.” New Jersey, which ranks number four nationally for the highest number of hate groups, saw an uptick in hate incidents against people of Muslim and Jewish faith. 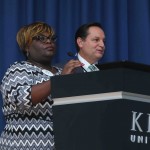 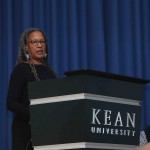 This though-provoking presentation was followed by the “Rising Tide of Hate!” panel discussion facilitated by Dr. Matthew Maddex, Instructor and Debate Coach at the Rutgers School of Communication and Information. The panelists (shown left to right) included Civil Rights Attorney Alan Dexter Bowman, Esq., Black Lives Matter Paterson chapter member Alexis Miller, Ms. Brooks, and Rutgers University School of Communication and Information Professor Mary Chayko. They discussed everything from the history of racism and its origin (fear) to the current proliferation of fake news. 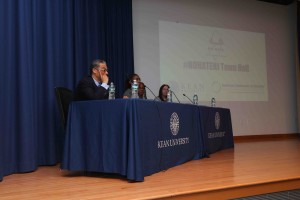 Dr. Chayko warned the audience of the potential spread of misinformation on social media and the Internet to serve hate-filled agendas. “Digital media is fueling hate and negativity,” she said. “But we can also use it to drive face-to-face understanding.”

“Dylann Roof was radicalized online through the use of racist ideology,” added Ms. Brooks. “It’s really difficult for the layperson to determine what’s true and what’s not – and there are more negative messages than positive ones.”

L’Oréal USA Senior Vice President of Diversity and Inclusion and American Conference on Diversity Board of Trustees Co-Chair Angela Guy, Kean University’s first woman President of Student Organization Emily Cubilete, and the President of the New Brunswick Islamic Center Sami Catovic (shown left to right) shared their thoughts during the “Call to Action” panel discussion, moderated by Kean EOF Director Yvonne Smith Segars, Esq. The resounding theme: In order to combat hate, we need to be “upstanders” to hate and not be passive bystanders. 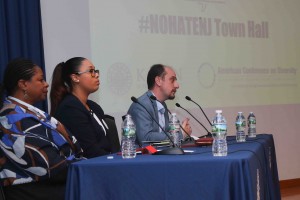 “When you see something, say something,” said Ms. Guy. “Everyone has an opinion. We just have to make sure what we are saying is not offensive.”

“We have to change the discourse and not give in to uncivil discourse,” echoed Mr. Catovic. “Reach out to your neighbor and affirm their presence.”

To reverse the rising tide of hate sweeping our nation against people of diverse religions, races, sexual identities, and places of origin, Ms. Brooks outlined several ways the audience should record and report incidents of hate. “When one person says something [to stop hate], other people will say something. Be that first person,” she said.

Want to report an incident of hate? Fill out this SPLC form: http://bit.ly/2iC07nu.

Beyond reporting, another way to advocate against hate is to be aligned with like-minded organizations. For ways to get involved with the American Conference on Diversity, please visit http://bit.ly/2bkJj0j. 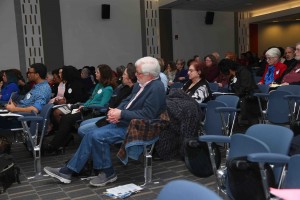