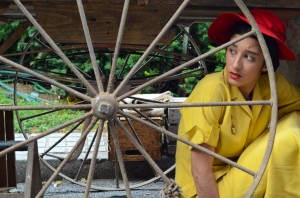 In collaboration Unity Productions Foundation (UPF), the American Conference on Diversity is proud to support the documentary film, Enemy of the Reich: The Noor Inayat Khan Story, to be shown at the State Theater in New Brunswick, NJ, on May 4 at 3 pm.

Throughout the 1930s, an unimaginable evil tore through Europe, as Hitler’s Third Reich terrorized its way to domination. During these tumultuous times, an amazing young Muslim woman living in Paris found her calling. Noor Inayat Khan grew up in a home that fostered faith and hope. Leading with her heart, she overcame her quiet nature and joined Winston Churchill’s covert operation to give the Allies a new chance at victory.

Khan was a Sorbonne graduate of child psychology, an author of a book of fairy tales – and a Muslim covert intelligence officer who died fighting the Nazis. Now, her remarkable story is being brought to the screen in the docudrama Enemy of the Reich: The Noor Inayat Khan Story.

“Despite the fact that many Muslims played brave roles and sacrificed during World War II, the prevailing narrative of that conflict usually doesn’t include any mention,” says Alex Kronemer. Kronemer is co-founder with Michael Wolfe of UPF, which has produced the award-winning documentaries Prince Among Slaves and Muhammad: Legacy of a Prophet. Both films have been aired nationally on PBS.

Khan was the daughter of an Indian Islamic scholar, Hazrat Inayat Khan, and Ameena Begum, an American convert to Islam. Her father founded The Sufi Order in the West in London and was a teacher of Universal Sufism. After Noor Inayat Khan’s birth in Moscow in 1914, the family moved to England, then to Paris in 1920, where she was raised.In 1940, when the Nazis invaded France, Khan fled to England, where she trained as a wireless operator after joining Britain’s Women’s Auxiliary Air Force. In early 1943, she began her assignment as a covert operative, joining Winston Churchill’s Special Operations Executive. This organization sought to undermine the Axis powers in occupied Europe via espionage, among other tactics. From Paris, Noor Inayat Khan secretly transmitted messages to Britain.

“For six months she was the only link between the UK and the French Resistance, pursued by the Gestapo, betrayed by French collaborators,” says Kronemer. The Nazis arrested her and sent her to the Dachau concentration camp in Germany, where “she fought back against her captors. She escaped twice. She never gave up one name or even her own name,” says Wolfe.

What are faith and civic leaders are saying about the film?

“Enemy of the Reich: The Noor Inayat Khan Story is a moving account of a young Muslim woman who sacrificed her life to combat the brutal domination of Nazi Germany. As a leader in the international movement to reconcile Jews and Muslims, this compelling film is a source of inspiration to me.”

President & Co-Founder of the Foundation for Ethnic Understanding

“I prayed for Noor and all those who suffered when I visited Dachau. American Muslims, Christians, Jews, Hindus: we all need to know her story, it can bring us closer together.”

“The beauty of this film is that it reminds us that extremism comes in all forms. The Nazi’s did represent the most harrowing form of extremism, but many brave communities did fight against them, including Muslim heroes like Noor Khan.”

Tickets can be purchased at http://EORNewBrunswick.Eventbrite.com. For more information, please contact Reema Kamran at 630 640 9422 or info@rreventmanagement.com.