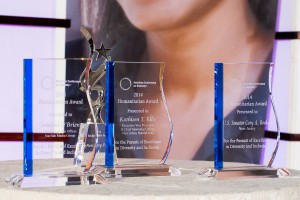 During the 2014 State Humanitarian Award fundraising dinner on April 3, the day before the anniversary of Dr. Martin L. King’s assassination,  the American Conference on Diversity President and CEO Elizabeth Williams-Riley asked an audience of nearly 250 guests, “If we don’t do something today, what will tomorrow be like for our children?” This was the very same question her mother asked during the 1960s to motive her efforts to put an end to segregation by participating in protests and sit-ins in the south during the civil-rights movement.

The American Conference on Diversity State Humanitarian Awards event is one way funds are raised to provide scholarships for students and schools throughout New Jersey to participate in a yearlong Lead For Diversity (LFD) initiative. Bayshawn Davis, a Rutgers University sociology major and a LFD volunteer, moved the evening’s audience with his personal journey. “I wasn’t always this bright, accomplished student you see standing before you today…I was actually incarcerated for five years,” he said. Mr. Davis joined the American Conference on Diversity where, he says, “Lead for Diversity revealed for me the effects of social stratification and how everybody is impacted by it. It showed the disconnect between the understanding of discrimination and helps bridge that gap of understanding so we can teach one another.” Each year, the American Conference on Diversity LFD program impacts an estimated 20,000 NJ students.

Rooted in the continued struggle for justice for all, the American Conference on Diversity makes a significant difference in the lives of youth, professionals, and community leaders throughout New Jersey through educational programs and initiatives. The nonprofit organization also recognizes leaders who help further the mission of diversity and respect. This year, the following individuals and organization were recognized:

►U.S. Senator Cory A. Booker (Humanitarian Award) – As the first Black U.S. Senator from New Jersey, he served as mayor of Newark, NJ, from 2006 to 2013 before being elected to the United States Senate in a special election in October 2013. During his tenure as mayor, he made economic development, greenspace expansion, and reducing crime priorities. Sen. Booker is also committed to connecting with the people he serves and the challenges they face. “He represents a model that all politicians should follow—getting out of your comfort zone and making sure you meet and know all of the different groups in your community,” said NJ Assemblywoman Annette Quijano, accepting on behalf of the senator.

►Soledad O’Brien (Humanitarian Award)– The award-winning journalist and CEO of Starfish Media Group not only produces stories that take a challenging look at the often divisive issues of race, class, wealth, poverty, and opportunity, but she personally furthers the mission of the American Conference on Diversity. In the wake of Hurricane Katrina, Ms. O’Brien and her husband created The O’Brien Raymond Starfish Foundation to help disadvantaged young women get to and through college. “People who work in diversity do it because we know we can make America better,” said O’Brien, who shared with the audience the challenges her parents faced trying to get married as an interracial couple in 1958, when it was illegal to do so in 17 states.

►Kathleen T. Ellis (Corporate Humanitarian Award) – As the COO of New Jersey Natural Gas, she’s responsible for the delivery of energy and customer service to nearly half a million customers. Ms. Ellis is also fully committed to making a positive impact on the state’s communities. She serves as President of the Board of Directors for 180 Turning Lives Around and is a board member of Meridian Hospitals Corp., PAM’s List – New Jersey, and New Jersey Future, serving as Secretary and an Executive Committee member. In addition, she is an advisory board member of Interfaith Neighbors, Inc., in Asbury Park and the New Jersey Climate Adaptation Alliance Advisory Committee at Rutgers’ Bloustein School. “This state has given me the opportunity to become aware of the importance of diversity, having worked for [several] of the state’s greatest leaders including former Gov. James McGreevey where I definitely learned about the power of acceptance,” she said.

►New Jersey Devils (NEW Bridge Builder Award)–A professional ice hockey team based in Newark, NJ, and the only major sports team to brand itself as a New Jersey franchise, the New Jersey Devils is dedicated to building bridges across NJ communities. Accepting on behalf of the team was President of Business Operations Hugh Weber, who addressed the American Conference on Diversity directly: “You have an open and willing partner in us, and we look forward to working with you…and continuing to recognize great people doing great work.”

If you were not able to attend and want to make a donation to sponsor a team of students for Lead For Diversity, please visit http://americanconferenceondiversity.org/donate.