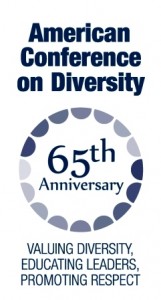 As tens of thousands gather to celebrate the 50th anniversary of the March on Washington and to hear civil-rights leaders reflected on the legacy of racial progress over the last half-century, the American Conference on Diversity is holding its own yearlong anniversary celebration–marking 65 years of dreaming for equality throughout New Jersey and beyond.

Like the work of Dr. Martin Luther King Jr., the American Conference on Diversity has been valuing diversity, educating leaders, and promoting respect since 1948. Today, our historic mission is more relevant than ever because it touches all segments and pockets of 21st century life. It extends from the playground to the boardroom. From our youth and collegiate programs to our professional development services, the American Conference on Diversity initiatives are innovative, engaging, and evolving to address a changing society.

“The rich legacy of our social-justice work has progressed over the decades, but we still have a long way to go,” says American Conference on Diversity President and CEO Elizabeth Williams-Riley. “We strive for the day when the quality of one’s life is not determined by the color of skin and the value of one’s talents and skills is not devalued because of gender, age, religion, nationality, or sexual orientation. Dr. King’s dream extends beyond the color lines to economic justice. In order to achieve any dream, we must wake up and take active roles in building bridges for justice.”

In recognition of this year’s parallel historic events, we asked American Conference on Diversity constituents statewide to share their thoughts.

“The March on Washington changed the course of American history. It also created a sense of hope and momentum around people collectively making their voices heard. We’ve seen the legacy of the March play out in so many transformative ways since that day in D.C., most recently with people hitting the streets to speak out against the Trayvon verdict. The power of people gathering in the spirit of social change, unity, and camaraderie continues to be a landmark of how we as human beings build community and speak our truths.”

DID YOU KNOW? Our flagship Lead for Diversity human rights and diversity awareness youth camp, originally called Anytown, has been featured in numerous articles in papers throughout the United States and was even featured on the Oprah Winfrey Show!

“ ‘We Shall Overcome’ is more relevant now for people of color in America. We all need to do everything we can to provide greater equality in a land of freedom and justice. There is still a major journey to bring all of society together.”

DID YOU KNOW? The American Conference on Diversity roots date back to 1927 with the National Conference of Christians and Jews (NCCJ) in New York City. To mark our 65th anniversary in New Jersey, we will be co-hosting a “Faith in Diversity” event on Oct. 10. For more information, please visit http://FaithInDiversity2013.kintera.org.

“To dream is to have a vision and both Dr. King and the American Conference on Diversity for me have vision, purpose, and legacy that will always be celebrated for years to come.”

DID YOU KNOW? The American Conference on Diversity trains about 100 employees each month through our professional development services programs.

“Our perception of things changes as we evolve as individuals and as a society. Often, the root cause of any conflict is misunderstanding or miscommunication. Advances in technology, access to information, and our social environment privilege us to take steps toward breaking stereotypes and learning about different cultures and backgrounds, and this is ultimately what brings everyone together. We should exercise this privilege more often.”

DID YOU KNOW? NCCJ began in response to anti-Catholic sentiment being expressed during Al Smith’s run for the Democratic nomination. Its founders included prominent social activist Jane Addams and U.S. Supreme Court Justice Charles Evans Hughes who were devoted to bringing diverse people together to address interfaith divisions.

“The March on Washington marches with us today because this country–by definition–constantly seeks to be a ‘more perfect union’ requiring us all to stand up in big and small ways for its ideals and for each other.”

DID YOU KNOW? Since 1995, more than 100 of New Jersey’s high schools have participated in our Lead for Diversity program and several thousand students have been delegates.