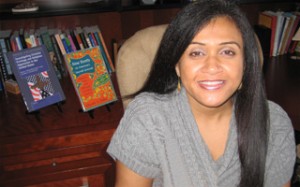 After immigrating from India as a young child, she spent her first night in the United States in Bergen County, NJ. Fast-forward to adulthood, and this summer, the Fairleigh Dickinson University Associate Professor of Education wrapped up the summer session as featured presenter for the American Conference on Diversity 8th Annual Educators’ Institute, held at FDU’s campus in Teaneck. The intensive four-day course combines instruction, experiential activities, facilitated dialogue, and small group work for teachers, administrators, counselors, and teachers-in-training who are interested in building more inclusive and affirming classrooms.

“We all have biases and we have to learn to recognize them,” says Dr. Joshi, a published author and one of our 2012 Greater Bergen Chapter Humanitarian Award honorees. “This Institute aims to help educators do that, and to apply what they learn to their teaching.”

Dr. Joshi’s career, which intersects racial, religious, and all other dimensions of diversity and inclusion education, began taking shape as a child growing up in Georgia. One of only a handful of Indian families in the area at that time, her parents founded the first Hindu temple in Atlanta. At the same time, she was growing up and being educated in a predominantly white neighborhood near Marietta, where “as the only little brown Hindu girl in the school, my teachers didn’t know exactly what to do with me!”

After graduating from high school, she attended Emory University and became fascinated with the Holocaust and the history of religion. “Night [Nobel laureate Elie Wiesel’s autobiographical account of life in the Nazi death camps] struck me and stuck with me like no other book. The injustice it described, combined with all that Wiesel has done to combat injustice in the decades since surviving the Holocaust, gave me a sense of purpose,” she recalls.

In 1990, she began to apply her education and experiences in the nonprofit sector, as a volunteer for the National Conference of Christians and Jews (NCCJ) in Georgia, an organization with historic ties to the American Conference on Diversity. During the summers, she co-directed NCCJ’s “Anytown” camps for high school students (now called Lead for Diversity) in Atlanta.

At Emory, Dr. Joshi earned a bachelor’s in religion and a master’s in theological studies from Candler School of Theology. She then went on to earn her doctorate in social justice education at the University of Massachusetts-Amherst. “That’s where I made the connections I’m trying to help my students make at FDU and the Institute: between different types of prejudice, and between the individual level at which we all understand bias and the cultural and institutional roots of the problem,” she says.

Dr. Joshi has also pursued post-graduate studies at the Hebrew University of Jerusalem and participated in the Summer Seminar for Educators at Yad Vashem, The Holocaust Martyrs’ and Heroes’ Remembrance Authority, in Israel.

After 9/11, Dr. Joshi’s work on racial and religious bias became all the more relevant, as brown-skinned Americans –  Sikh, Hindu, Christian, and Muslim – were targets of anti-Muslim “backlash” attacks. Having just completed her dissertation on “lived religion” among second-generation Indian Americans, she became a resource for educators, the media, and policy-makers.

As a faculty member at FDU and an American Conference on Diversity presenter, Dr. Joshi continues to pursue her passion for multicultural and social justice education by prompting all to ask, “Where are my biases?”

“People are familiar with diversity as heroes and holidays but they’re not looking at issues of prejudice and systemic biases,” she says. “My work aims to do that.”

Prior to her appointment at FDU, Dr. Joshi was a Visiting Assistant Professor at the Center for the Study of Ethnicity and Race at Columbia University, where for two years she taught Asian American Studies and Comparative Ethnic Studies. She also taught in the American Studies program at Princeton University. She has presented her research at the White House, the Organization for Security and Cooperation in Europe (OSCE), and as a host of academic conferences. She has written numerous publications, including her book, New Roots in America’s Sacred Ground: Religion, Race, and Ethnicity in Indian America (Rutgers, 2006), which won the 2007 Phillip C. Chinn Book Award from the National Association for Multicultural Education (NAME).  She co-edited Understanding Religious Oppression and Christian Privilege (Sense, 2008). She has co-authored chapters on religious oppression and immigration, racism, and globalization for the second editions of Readings for Diversity and Social Justice and Teaching for Diversity and Social Justice. Dr. Joshi was the Religion, Schools, and Society section editor for the Encyclopedia on Diversity in Education. Her commentaries have been published by the New York Times, the Huffington Post, and elsewhere.  In New Jersey, Dr. Joshi has provided testimony before the Governor’s Blue Ribbon Commission on Immigration, has been a member of the Governor’s Asian American Commission since 2005, and served on the New Jersey Equal Employment Opportunity Advisory Commission from 2006 to 2008.

To read more about Dr. Joshi, including her written work, visit www.khyatijoshi.com.

For more on the American Conference on Diversity Educators’ Institute, please contact Renee Ayers, Director of Professional Development Services at renee@americanconferenceondiversity.org or (732) 745-9330 ext. 23.