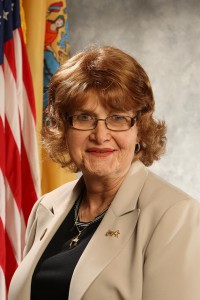 On April 2, the American Conference on Diversity will recognize Barbra “Babs” Casbar Siperstein with the 2015 Advocacy Humanitarian Award during a spectacular 20th Anniversary Statewide Fundraising Gala in West Orange, NJ.

Ms. Siperstein is a member of the Executive committee of the Democratic National Committee (DNC), Deputy Vice Chair of the New Jersey Democratic State Committee, and Political Director of the Gender Rights Advocacy Association of New Jersey. She takes particular pride in taking a leading role in amending NJ’s Law Against Discrimination to protect transgender people, when leading legislators and advocates predicted failure and the legislation passed 102-8 in the shortest time period of any similar state legislation. She also notes that much more significant to her 2009 appointment to the DNC was the unanimous vote by the membership to add “Gender Identity” to their Charter and By-Laws minutes prior to the confirmation of her appointment.

“Babs is a change agent who has devoted her entire life to advocating for equality, justice and our mission of promoting respect,” says American Conference on Diversity President & CEO Elizabeth Williams-Riley. “Thanks to her unwavering commitment to inclusion for all New Jersey residents, she has made a significant social impact on the lives of many!”

Ms. Siperstein has also served as Vice Chair of the DNC Eastern Caucus, President of the New Jersey Stonewall Democrats, Co-Chair of National Stonewall Democrats Federal PAC Board, Vice Chair of Garden State Equality, Executive Board member of National Stonewall Democrats as Chair of the DNC Relations Committee, and a member of the New Jersey Civil Unions Review Commission. In 2004, Ms. Siperstein was a recipient of the New Jersey Personal Liberty Fund’s Honors Award, and was a delegate to the 2004. 2008, and 2012 Democratic National Conventions, where she was New Jersey’s first transgender delegate. She served on Governor-elect Jon Corzine’s gubernatorial Labor and Workforce Development Policy Group after his election in 2005. In 2009, she was a co-author of The Dallas Principles and a speaker at the National Equality March on the DC Mall. In 2010, along with Gov. Jack Markell, she was honored by the Delaware Stonewall Democrats, and was a recipient of Jersey City’s JCLGO “Vital Voice Award.” In 2011, she was the first recipient of Garden State Equality’s John Adler Icon of Equality Award and named Grand Marshal of the Hudson County Pride Parade and Festival. Ms. Siperstein became the first openly transgender DNC member in 2009 when she was appointed as an At-Large member by Chairman Tim Kaine and was elected to serve on the DNC’s Executive Committee in 2011. Reappointed in 2013 by Chair Debbie Wasserman Schultz, she was re-elected by her peers to the Executive Committee.

In 2014, she was honored as a Champion of Civil Rights by Passaic County Freeholder John Bartlett and by the New Leaders Council- New Jersey Chapter, receiving their “Equal Rights Award.” Celebrating LGBT History Month, The Pride Network gave her their “Stonewall Legacy Award.”

She is a longtime-serving member of the Edison Township Municipal Alliance. She has been a Board Trustee of Congregation Beth Mordecai in Perth Amboy for more than 25 years and has served as President of the Regional Conservative Hebrew School of Northern Middlesex County. She currently holds the title of Princess Royale of the Imperial Court of NY and is a Past Master of Menorah Lodge F & A M. Prior to rejoining her family business in 1975, she was an operational auditor for major international financial institutions and a consultant with a major international accounting firm.

Currently, along with her daughter Jana, Ms. Siperstein owns and operates Siperstein Fords Paint Corp., a specialty coatings supplier and home-decor retailer. A former owner and breeder of Standardbred horses, she holds a Bachelor of Arts degree from Rutgers and an MBA from Pace University.

Widowed in 2001, she takes one day at a time, enjoys a long-term bi-state relationship with a remarkable partner as well as spoiling and encouraging her three grandchildren and wishes they can enjoy a life where people learn to communicate, take responsibility for their actions or inactions, and have respect for each other!

In addition to honoring Ms. Siperstein, the American Conference on Diversity will present awards to the following remarkable individuals:

The Statewide Humanitarian Awards gala is one way the American Conference on Diversity raises funds to provide more than $65,000 in scholarships for students and schools throughout New Jersey to participate in our Lead for Diversity (LFD) Institute, helping youth develop leadership and human-relations skills that position them for career success.

The fundraiser, including a silent auction of artwork, sports memorabilia, and fine jewelry items, will be held at the spectacular Pleasantdale Château from 6 p.m. to 9:30 p.m. at 757 Eagle Rock Avenue, West Orange, NJ 07052. Seating is limited and filling up fast! To purchase tickets, contact Gala Coordinator Barbara Getze at bgetze@aol.com or (800) 626-8097 today. Tickets must be purchased in advance. Special Anniversary ads and sponsorship opportunities are also available to both demonstrate your commitment to our leadership-development program and to recognize Ms. Siperstein and these outstanding honorees.