The American Conference on Diversity showcased the rich diversity of New Jersey’s past, present, and future during the Greater Bergen Diversity Legacy Breakfast on October 24 at Fairleigh Dickinson University in Teaneck, NJ. 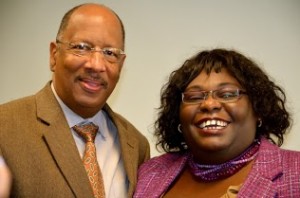 “We’re challenging people to think about the social inheritance of inclusiveness and what  these award recipients are passing on to our youth, because so much of our past impacts our future,” said American Conference on Diversity President and CEO Elizabeth Williams-Riley (shown right with NJ Assemblyman Gordon M. Johnson) to a packed audience of educators, diversity thought leaders, and community leaders.

The Diversity Legacy Breakfast was part of the American Conference on Diversity’s yearlong 65th anniversary celebration designed to promote respect within the state’s diverse communities by recognizing outstanding individuals and organizations. 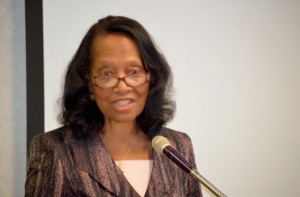 Highlighting the initiative was special guest speaker and Lifetime Legacy Award recipient Theodora Smiley Lacey (shown above). A champion of civil and human rights, she moved the crowd with her personal journey from the past–growing up in segregated Montgomery, Ala., where she encountered many forms of racism–to the present as a Teaneck resident. She worked closely with the late Rev. Dr. Martin Luther King Jr. during the famed bus boycott of 1955. In the summer of 1957, she joined her late husband, Dr. Archie Lacey, traveling throughout the counties of Alabama researching voter registration and injustice in the political system of Alabama. This research served as a legal basis for the great wave of protest and litigation that sought to enfranchise the Black voters in Alabama.

Ms. Smiley Lacey’s community involvement continued after moving to Teaneck, where she played a major role in successfully integrating the public school system. She was chosen as a delegate to Russia representing New Jersey in a Citizen to Citizen Exchange Program, served on the Teaneck Township Ethics Board, and presently serves as a commissioner on the Teaneck Township Historical Preservation Commission. Ms. Smiley Lacy chaired and coordinated “Rosa Parks Day” in Teaneck, the March for Peace and Freedom to Washington, D.C., and the Children’s March on Washington. She is also a co-founder of Teens Talk About Racism, an annual conference held at Fairleigh Dickinson University for students throughout Bergen County, serves as vice chair of the African American Advisory Board for Bergen County, chair of the Martin Luther King Birthday Observance Committee of Bergen County, and co-chair of the Martin Luther King Monument Committee, a project to erect a life-size statue of Dr. King in Hackensack.

“I grew up in a society that made it illegal to play in the park,” said Ms. Smiley Lacey. “While you won’t see segregation today as I knew it, I continue to see other forms of discrimination surrounding religion…. True change, equality, and diversity will only be sustained if each and every one of us comes together and forges ahead.” 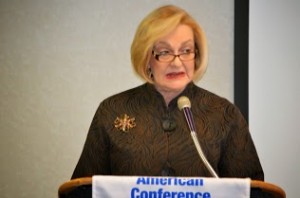 Following Ms. Smiley Lacey’s historically insightful presentation, Joy Kurland (shown above) of the Jewish Community Relations Council of the Jewish Federation of Northern New Jersey accepted the Community Diversity Award on behalf of the Interfaith Brotherhood-Sisterhood Committee of Bergen County. The Committee, which was created to promote mutual understanding and respect between various religious communities, held its first faith-based diversity event more than 25 years ago. Presently, the Committee holds an annual breakfast as well as prayer vigils, educational forums, and other programs to support its mission. The Committee is co-sponsored by several faith communities, including the Bergen County Council of Churches, the Jewish Community Relations Council of Northern New Jersey, Dar-UlIslah Muslim Community of Bergen County, the Arya Samaj of New Jersey, and the Hindu, Baha’I, Sikh, and Jain communities of Bergen County. 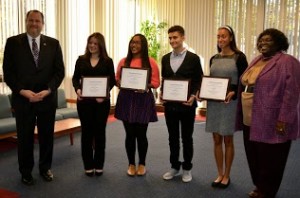 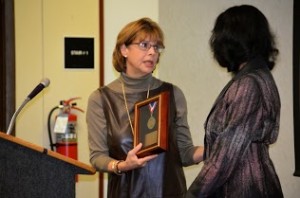 The Greater Bergen Diversity Legacy Breakfast was the second of several information-rich diversity initiatives the American Conference on Diversity is hosting this fall. For more information, please visit our events calendar http://americanconferenceondiversity.org/events.